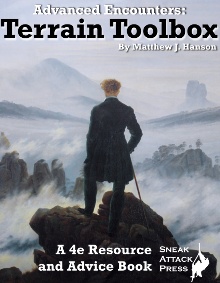 Terrain Toolbox is the first in a planned series of books that offer advice and tools for DMs to create more memorable encounters. Terrain Toolbox is designed to increase creative use of terrain in your game, making battles more dynamic.

The book begins with general advice for designing terrain effect and powers. It discusses why we use terrain, different things terrain can do, and how the terrain might change throughout an encounter.

Terrain Toolbox also contains forty-eight sample terrains, including blood mage’s circle, solid clouds, and lightning pillars. Each sample terrain includes advice on how to use the terrains, and most include mechanical and cosmetic variations. 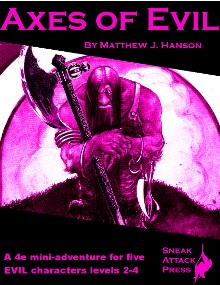 The Axes of Evil are the meanest, vilest, evilest gang of mercenary thugs the world has ever known. Or so they’d like to believe. In Axes of Evil the players take on the roles of over the top villains. They battle pretentious knights and a dapple gray unicorn, as they attempt to assemble their most terrible weapon yet: the bunny golem!

Axes of Evil is a short adventure for five second-to-fourth-level characters. It is primarily designed as a one shot adventure, but can be adapted to nearly any campaign. 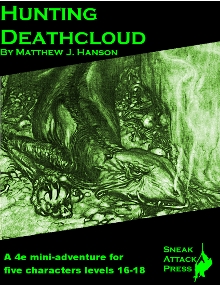 The elves of Solduron have long known the dragon Deathcloud sleeps somewhere deep in the Whispering Forrest, but for decades none have seen her. That all changed three days ago when Deathcloud appeared and destroy an elven outpost. Now the elves need heroes to journey into the Whispering Forest, rescue captive elves, and put an end to Deathcloud once and for all.

Hunting Deathcloud is an adventure for 17th-19th level characters. It is set in the Whispering Forest, an ancient woodland that can be dropped into nearly any setting. You can run it either as a one-shot or as part of a greater campaign.

Everybody in Hedgebird knows that the old DeMay orphanage is haunted, but that did not stop the Perseville family from moving to town and buying the place. Nor did it stop the Tarnak boys from venturing inside. Now the children are trapped inside, and to get them out the heroes must confront terrible ghosts from the orphanage’s past.

Good Little Children Never Grow Up is a horror themed adventure for five characters levels 3-5. You can run it either as a one shot adventure or as part of a larger campaign. 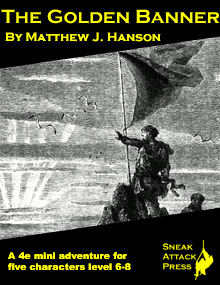 Grufus Tinker is hosting a feast to honor his rediscovery of the Golden Banner, a holy relic key to the history of Greenport. On the day of the feast, word comes to Tinker that somebody plans to attack his celebration. Now Tinker needs a few heroes to investigate the attack and protect his guests. As the characters investigate they peel back layers of intrigue, and discover a centuries old conflict between faiths.

The Golden Banner is a short Forth-Edition adventure for five characters level 6-8. It is set in an urban port city that can easily be placed in any setting or run as a one-shot. 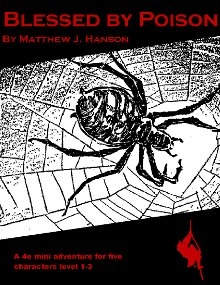 Kurk Davrip, Hedgebird Village’s most renowned goblin hunter, has disappeared. Now it falls to the player character to find him. As they venture into Raven Woods, the heroes uncover a trail infested with spiders. At the end of their search they discover that Davrip is still alive, but he is no longer entirely human.

Blessed by Poison is a mini-adventure for 1st-to-3rd-level characters that a DM can drop into almost any campaign.